Hello, my name is Dawn and I began cycling in 2011 and was hooked on day 1!  I started out riding my with sisters in San Antonio riding on the Leon Creek Greenway System.   I really need to get back to doing that with them.  It’s a beautiful path to cycle on and we went out every Saturday Morning.

The saying that goes, the number of bikes a cyclist is (N+1) is so true! (N being the number that you currently have and the +

1 is the one that you are saving your money to buy next!)

M first bike, I got off Craigslist and it is a Giant 21″ mountain bike.

My next purchase was a 2007 Trek 1.2 from my sister after she upgraded her bike to a Trek 5.2.  I rode that for a while as I continued to ave up my funds for the next, ultimate ride: My own goal when my sister acquired her was also a Trek 5.2.   After saving for a while, I found a 2007 Trek Madone 5.7 60cm in RED on ebay.  I knew as soon as I saw her that she had to be mine.  The listed had been up for a while with a min starting bid an no one started.  So I messaged the buyer and gave him an offer that was a little higher then his starting price.  So he posted a buy it now button and she was mine.

During my web browsing over the next few months, I came across a bike that I had never seen before and just had that, WOW feeling (Damn you N+1!!).   By the time I got my Trek, my husband decided to join me in my cycling, so he started to use my Trek 1.2 while he started his research and saving.  When he got closer to his goal and was showing me some of the brands that he was looking at, I remembered my WOW from earlier.  I got home and showed him the RoundTail® site and he knew immediately that he must own one.

My “Lady in Red” RoundTail

We watched the videos and looked at more images on the site and just knew that was our next bike.    He called Lou (Owner and designer of the RoundTail) and learned all we needed about the bike.  Then the race was on to see who would own theirs first.  Unfortunately for me, he won! But I did have mine about 6 weeks later.  I would say that I might be safe in saying that my +1 is done, but I don’t think it is.  I would like to do some more off road biking, and that means a higher end off road bike. The desire has not hit enough to actually start saving for it, but the itch is there………..

So this was our first year riding in the hotter'n'hell hundred and it was the one "hell" of an experience.   I had heard that over the last few years, there has been 12-14 THOUSAND participants in Saturdays activities.  Now it's pretty difficult to really understand the magnitude of the volume of people that is on a bicycle.

I have found a raw video on youtube of the start of the ride.  The group that I started with, got there 1hr30min before the start and were parallel with that big blow up guy.

It's set this video to start at the 30 min mark, as that is just before the starting cannon goes off and we begin to roll.  The video continues to go on and on and on.  The last 5 mins is when the massive mob of riders is gone and they do a quick radio broadcast about the start.

It's time to starting thinking about and planning for this years HOTTER N' HELL HUNDRED 2014!    Darrell and I are in the registration and planning stage of it, so if anyone has any advice on what to do, where to go, any pro tips, let me know and I get them added to this page to share the love of cycling!

Video files are large, so I suggest a high speed connection, or lots of patience.
Part 1 of 3

Thought you might like to know about the Pedal Hard Spring Fling next Saturday March 8 out at Driveway Austin. The Spring Fling is a non-competitive fun ride on the Driveway Austin car race track. Two options to chose from, the 3 Hour Endure category ($30) and Power Hour category ($20). Come on out and ride as many laps as you want in the specified duration. Neutral aid station available every lap!

Come on out and set an average speed PR with your friends or just ride for fun!

Driveway Austin is a Le Mans style automobile facility used for testing and driver training. Located in East Austin between the Colorado River and Walnut creek, the facility has some of the smoothest asphalt you'll ever encounter. Plus, it's Car Free while we're out riding bikes on it!

Stick around afterwards, have a cold beer, some food, and watch some bike racing. The Kenny Hill Autowerks Spring Classic races start up after the ride. It's a day of bikes and fun out at Driveway Austin!

Hello! We are both going to be riding in the Tour Du Rouge this year.  Dawn rode last year (May 2013) and Darrell volunteered for the crew and was assigned to the "sign crew" 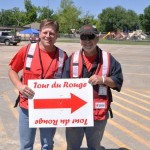 Darrell and Steve on Sign Duty on the Tour Du Rouge

So, once again, we are in the midst of Fundraising for the American Red Cross!  As of today. we are 73% completed with this task.  If you are looking for a great cause to donate to and could use a tax deduction, might I suggest a Donation to our cause.